What I’m working on right now… … is a continuation of the update I posted on Instagram last night.1 I made these jeepney, tricycle, and pedicab doodles 2  a week ago and thought of printing them on the Gocco… until I realized that I didn’t have enough screens.*headdesk*  But as explained in the previous post, this is what led to my interest in rubberstamping in the first place which just proves that necessity is the mother of  innovation (and crazy new obssessions).

On the home front, Arn is happy that I’m spending evenings being artistic — not just vegging out in front of the TV watching J-dramas (Teehee. Now you know. ) So now I’m either carving or doodling while my iTunes blasts out J-pop. Same difference. 🙂 I’ve actually been semi-passively studying Nihongo since 2011 but I’ll reserve that story for another time…

Before I went off-tangent, I was gonna say that Arn and I have been talking about what sparked this sudden desire to create with my hands.After some thought, I had the answer: Design Festa!!!

This cheezy photo below was taken at the Design Festa Gallery in Harajuku, Tokyo in 2006. (Whattapose *cringe*)

(More photos — and cheezy poses — in my old Flickr gallery)

That was the first time I heard of it. Since then I’ve been wanting to attend the actual festival but our timing was always off. When we planned our trip for this year, I made sure to check the schedule. They usually hold it in May and November. We chose to go in the fall because Tokyo would be just as hot as Manila if we went in the summer. 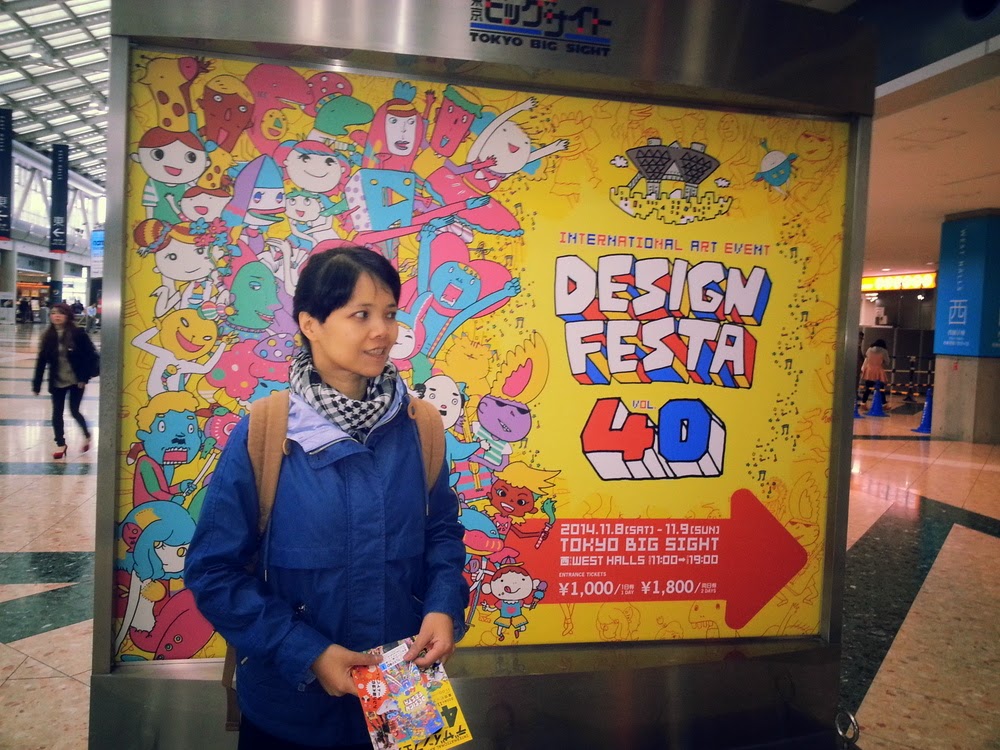 So here I am all giddy, holding our pre-bought tickets which we purchased at the HQ in Harajuku (the same place in the 2006 photo I posted above). We actually arrived at Tokyo Big Sight 30 minutes before it opened. 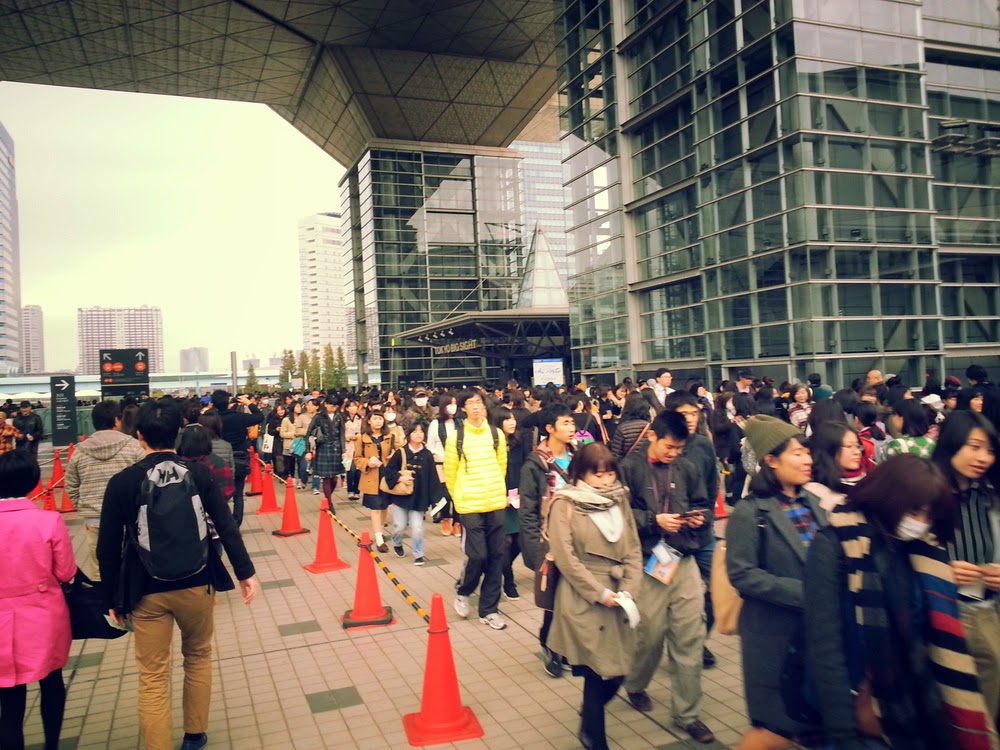 This is not even half of the crowd that was there bright and early. See how behaved and properly-queued up everyone was though. 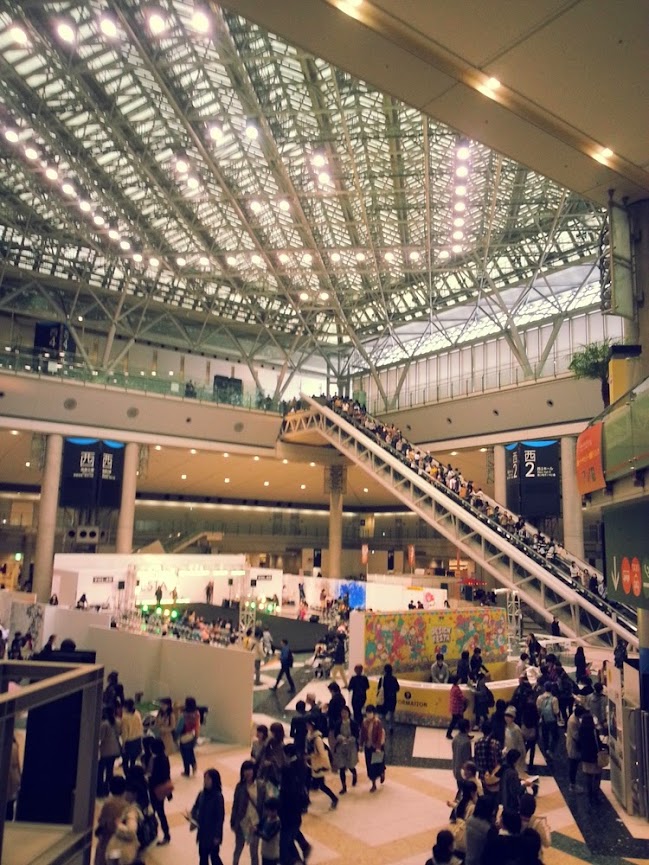 Inside, the place was bursting with kawaii, I didn’t know where to start! 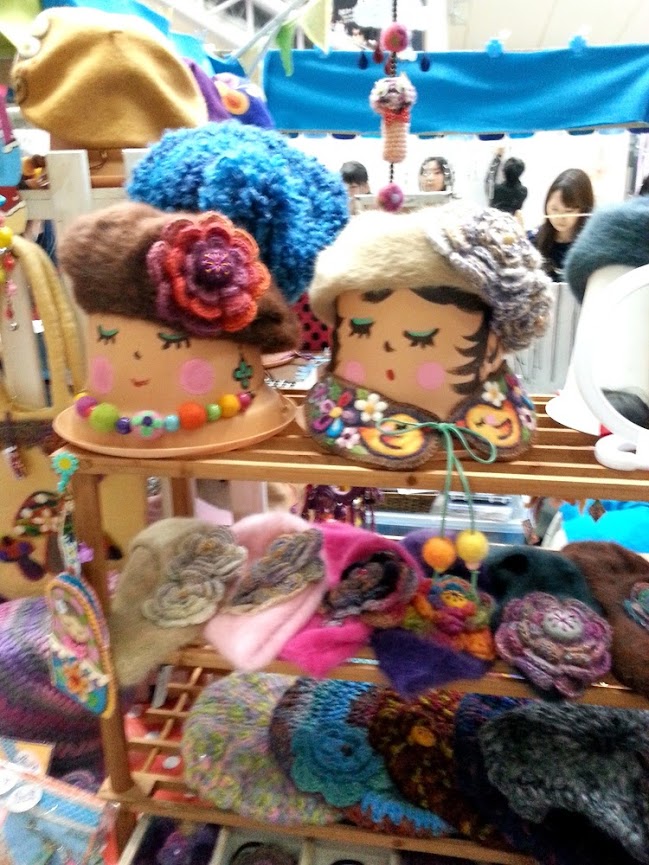 I went bananas over all the cute stuff and even had photos taken with the very friendly and talented artists who were only too happy to indulge our whims. 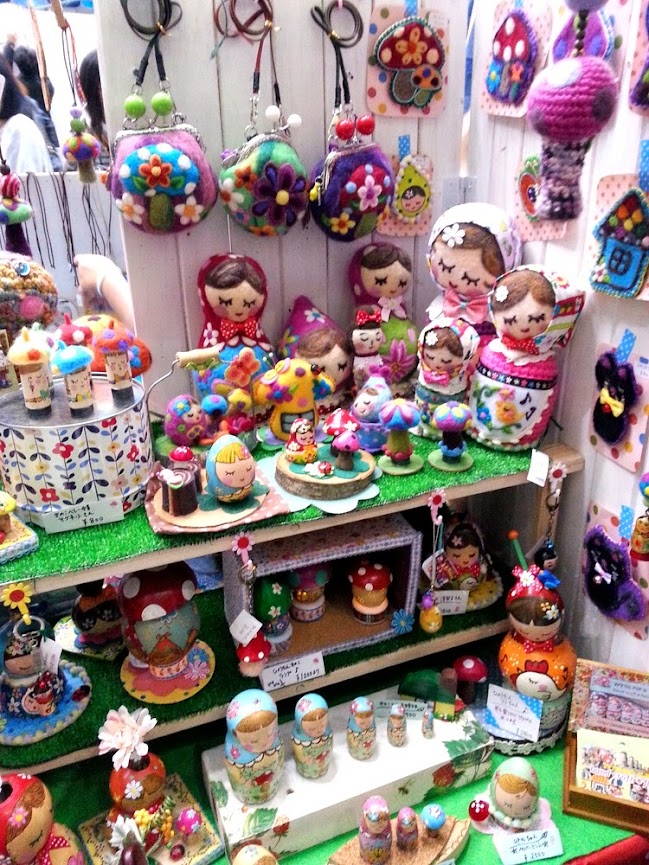 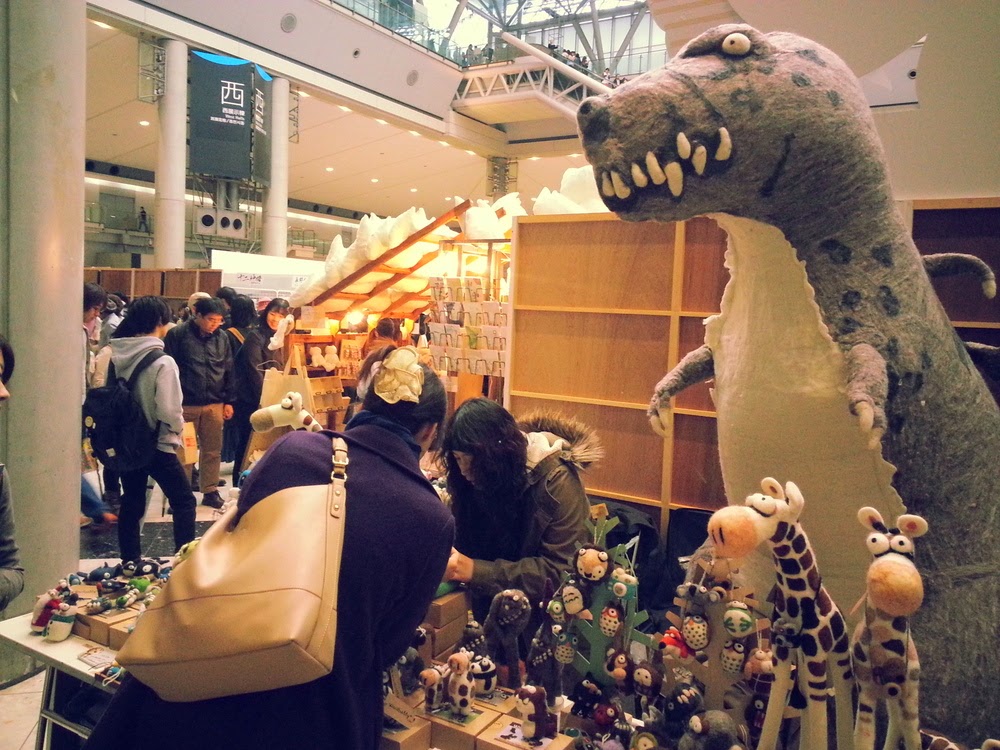 Arnold, meanwhile, enjoyed taking photos and videos of the kids who were painting on the scene. 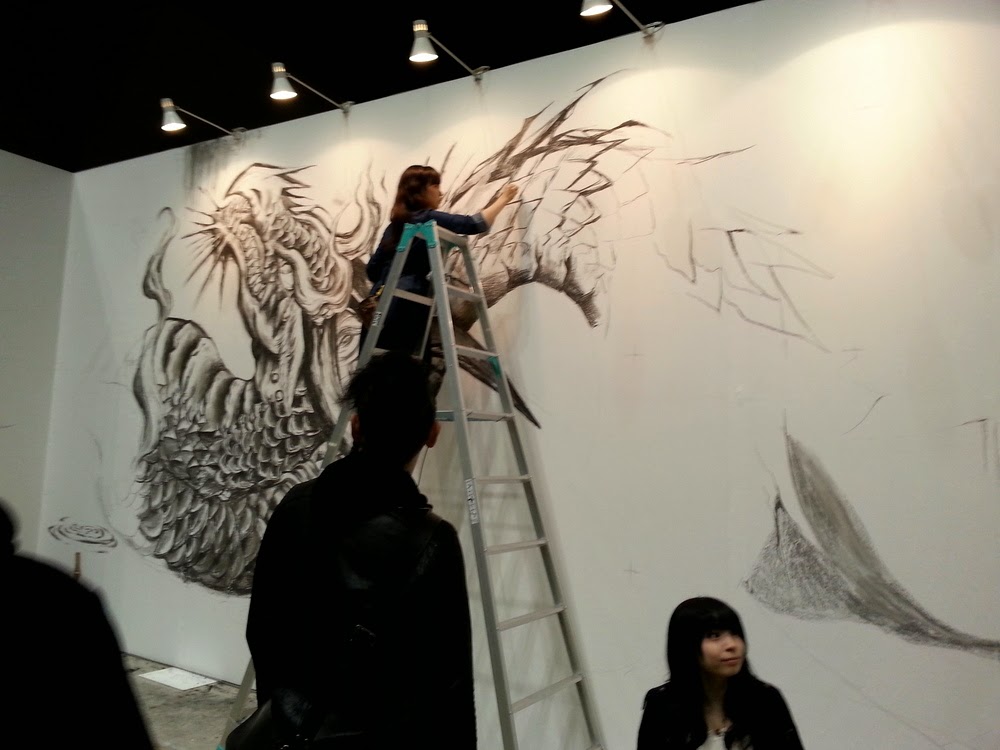 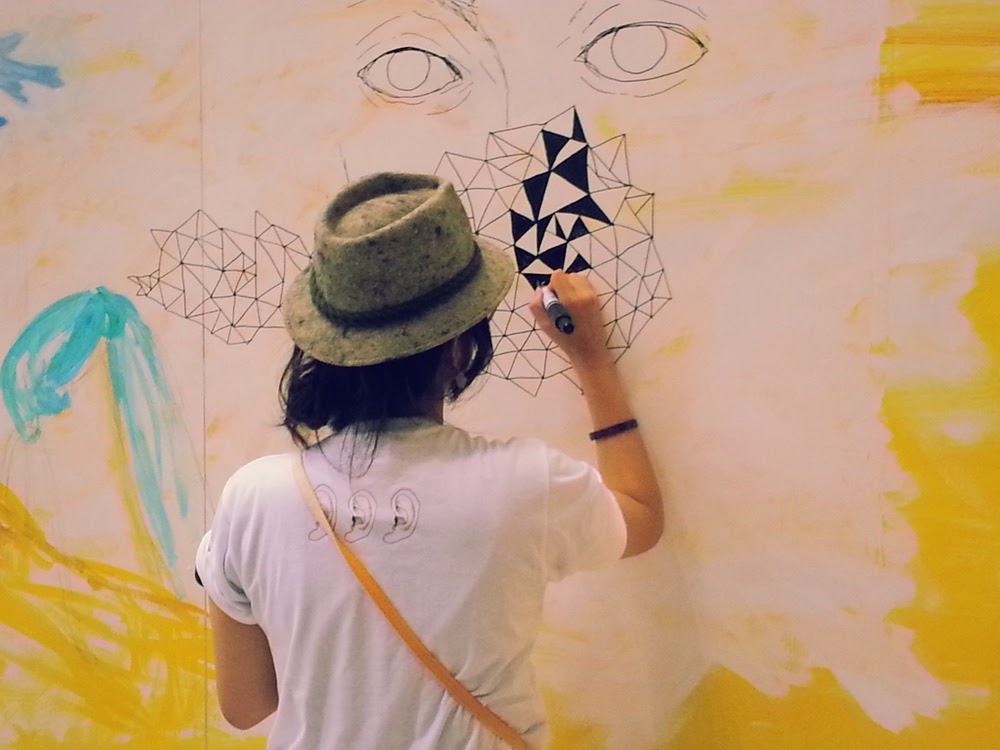 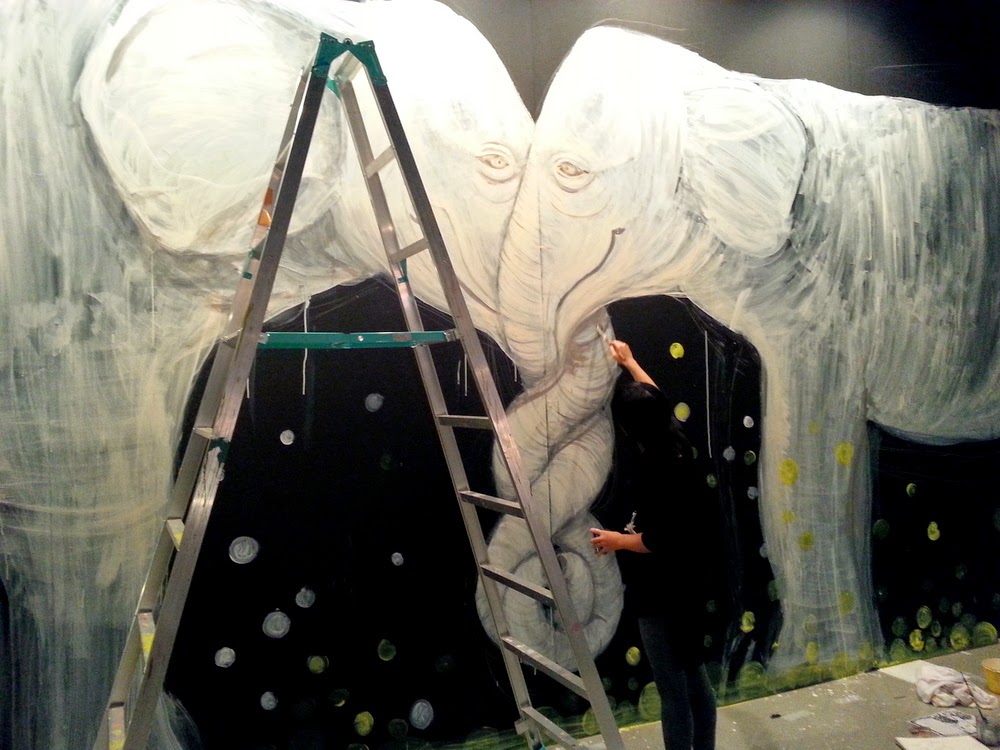 We originally planned to stay until around 4pm so that we could go somewhere else afterwards but we ended up leaving at 8pm, closing time, because there was so much to feast our senses on. Indie bands were playing outside. Strange short films were showing upstairs. A diverse selection of food carts dotted the place. At the end of the day my tote was filled with handmade puraban brooches, plushies and some stationery. Arn bought several art cards and  indie comics. Ironically, I didn’t notice any keshigomu hanko (hand-carved erasers) although I’m positive there was a whole section devoted to it…

There are more photos in this Google album.

Hope you enjoyed this post and hopefully I’ll have finished prints to show in my next post! 🙂

Hello! Is anyone still reading this? I’ve been wanting to revive this blog but I didn’t know what to write about… or if what I will write will interest readers, even if there are just two or three of you now. Or none? Eep! *takes deep breath* Aaanyway. I’ve noticed that blogs these days seem to be more focused on making money, unlike in the early days when everyone was doing it to share thoughts with a tight-knit community. I miss those times but I guess there’s Facebook now for that kind of thing.

So maybe I’ll start with what kept me busy when I wasn’t here. Ironically, I was also  blogging –> over there. What started out as a small hobby exploded into something bigger than I expected. At least I was still making art in the form of invitations but I missed having a venue for personal self-expression. So then I started making little illustrations that I turned into patterns which I sold online on various surfaces, from iPhone covers to fabric.

And if you’ve seen my Instagram feed, you’ll notice that I’ve recently been leaning towards analog design. I rescued my Print Gocco from unuse1 and went crazy using up almost all of my (ahem, hoarded) screens and bulbs. Sadly though, since the Gocco got discontinued, supplies are now hard to come by — not to mention really expensive if you’re lucky enough to find some on eBay. Which is why I’ve been looking for other ways to get my art printed and then I thought, why not try rubber stamping? We did this in school with erasers before but I haven’t done it in years.

So last week I got reacquainted with the X-acto knife and, armed with cheap National Book Store rubber erasers, I started carving away. I’d set aside 2 hours an evening just to practice. There was some blood oh yes but I’m determined to get a lot better at it so that I can get my ideas on print. I’ve learned three things so far:

1. I need better sculpting tools. I ordered a Speedball lino cutter from Amazon but I’ll have to wait for a few more weeks for it.
2. The cuts should be shallow. I was making deep cuts at first but then I noticed  that it took a lot of effort to turn the blade around which resulted in jagged lines.
3. Practicing can really make a difference. Comparing the stamps I made last week with this week’s batch, I would say there’s an improvement.

Here’s one I made today. The lines are still crude but I’m glad I managed to carve out all those little stripes without giving up. Stay tuned for more of my adventures in rubber stamp carving. Meanwhile, I also wanted to tell you that I spiffied up the surroundings in case you hadn’t noticed. 🙂 A portfolio of my newer stuff is now integrated into the site plus I wrote a novel for the about me page lol. So there, I started blogging here again — no turning back now. More soon!