I apologize for being in a bad mood today but a certain “Totally Creative Graphic Design Studio” totally ripped off one of my original artworks and is selling it on notepads, journals and other stationery in their store “Invitation House“. Tsk.

My original design, a low-res image of which has been on Flickr and my Cafepress store since 2008 is on the left. The copycat’s “design” is on the right (watermarked with the statement “property of Invitation House”. Yeah, right!) 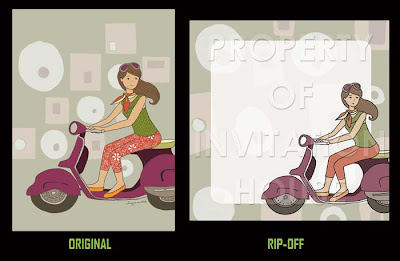 A friend who was browsing the Invitation House stall in Trinoma gave me the heads up. I’ve already written the proprietor, Jess Marquez — who may or may not know that the design is a rip-off – and I certainly hope something will be done about this soon.

UPDATE (May 31, 2010) ~ my friend, Rock Ed/ReThink Media Group head Gang Badoy Capati blogged about it on Tumblr this afternoon and the owners quickly got in touch with her so she set a meeting for tonight. We met with them just a few hours ago along with lawyer/writer Oli Reyes and I think it’s safe to say that we were able to reach an agreement with them. Apparently a freelancer artist/OJT student submitted the design to them and passed it off as her own (boo!).

The owners of TCGS and Invitation House, Mr. & Mrs. Jess Marquez seem like a pleasant couple and it turns out that they are willing to settle the mishap properly. I’ll give you details once we’ve finalized it but right now I am just thankful for the support of lovely friends who blogged/tweeted about it and gave tons of advice on how to handle the issue. It’s not about me getting compensated, it’s really about standing up for the creation and protection of 100% ORIGINAL work.

I received a tip as to the name of the so-called “artist” who ripped off my design in this entry’s comments page. Can anyone else confirm if the info provided is correct? By now I hope she’s learned that tracing over someone else’s hard work is SO not the way to success.